skip to main | skip to sidebar

Cease Fire before a European Battle? A Distant Preview of Euro'08 - Part.1 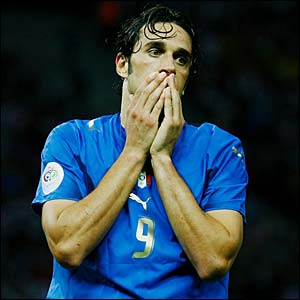 Summer 2006, just before the FIFA Germany'06 was underway, I visited a local tattoo parlour in Ealing, got a tricolore 'Italia' inked along the back of my left arm. I've only vague memories of Italia'90, but a painful climax to USA'94 and 5 more major disappointments are still etched in my mind, permanently, just like a mental version of this tattoo. Another disappointment is not gonna make me love them any less, but a victory this time around would be the most appropriate. It would not only give the long waiting fans, moments to cheer, but clear the black clouds hanging around the boot of Europe, after the Calciopoli. The rest is history.
Fast forward to almost-spring 2008, just around the corner to the European Championships, and something says I cant be as confident as I was during the summer, a couple years ago. For real?
Not only has Marcello Lippi made way for Roberto Donadoni as coach right after the WC success story, but the whole look of the team is now different. Although a  stuttered start had stained his reign Donadoni has managed to successfully qualify the Italians to the Euros, but in the process had used the services of some 40 plus players, among them are many debutants. There were success stories(Quagliarella, Di Natale), the regulars stand up guys (Toni) and disappointments (Lucarelli). One freedom Donadoni had was to rotate the squad as much as he wanted to. But, thats not a possibility with the Euros, as experiments are no longer the way to go when you're heading into a championship and what Italy so far hasn't been is a well rounded, solid team. Though Italy won its qualifying group, they scored only 22 goals. And its not the same scene in Serie A as it was pre-WC'06. None of the top 3 league scorers are Italian and there are only 5 in the top 10. Out of this Borriello, currently top Italian scorer, has not really featured on international campaigns, Totti is retired and Alex Del Piero is not a favorite with Donadoni. Outside of Serie A Toni, at Bayern Munich, is the only one to have settled well with his club. Lucarelli and Bianchi have returned back into the peninsula on loan after being named(rightfully) as flops at their respective clubs. To make matters worse, Italy was named into the death group alongside WC finalists France, Holland and Romania.
With some heavy responsibility on his shoulders, Donadoni needs to look and observe a little deep if he wants to seriously contend for the trophy thats been elusive for 46 years. What does his eyes see?
(will hopefully continue with what my eyes see, soon)
Stia bene,
AG.
Posted by AJ Menon at 11:30

This is apparently a great deal of information and its obvious for how much time and effort has been put in here, how much has been written and said and PLUS, i am sure all of it must have gone through and extracted out from research based work and then written and ornadiated in a easy language for layman like us, viewers/readers to know of them things, here. I could only bare patience of myself, till the upper middle of this page, but, definitely you deserve much appreciation and mad mad props for giiving it such a hard work, tough time and coming out with an overall [JOB DONE GOOD!] Keep being this creative in future! and ...by the way... WHERE is [ABZthelyricist] ???? in this blog of yours ....nothing [about] or [for] him? *sob*sob*